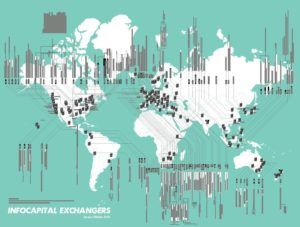 The American military network ARPAnet was conceived as a way to maintain uninterrupted communications in the event of nuclear war. Ancestor of the Internet and foundation of the Global Information Infrastructure, ARPAnet springs from exactly the same source as the “push-button war” that lay behind it: the change of scale provoked by the early 20th century discoveries in physics, within an industrial society capable of organizing the productivity – including the scientific productivity – of thousands of agents. Here, no doubt, is the real birthplace of the information society: a society massively penetrated by the sciences and technologies of information and telecommunications, using them to carry out the design of the planet or at least, that of its components (with design replacing politics). A society whose governmentality entails the knowledge of the real, that is to say, the transformation of reality into information. A society whose governmentality unfolds between its smallest common denominators (atomic, electronic, magnetic, genetic, chemical) and its largest common denominators (climate, planet, solar system), by way of laws, formulas and norms that determine its productivity, means, and possible destinies. (…)

Map in english  “governing by network”