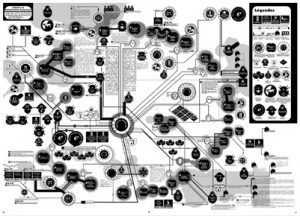 “First of all they’ve got to start by knowing how the system works… We can advise them on how they should put their argument on paper. We can advise them on which people in the committee would be interested… So that way you build a map for them, a sort of road map of where they need to go, who they need to talk to and what they need to know… We don’t do the lobbying… What we do is to give the company the information so that they can go and make the case for themselves.”

Absent from the local landscape, invisible to the naked eye, a labyrinth of laws and standards lends tangible form to our existence. The European Union, like the North American Free Trade Area which it mirrors, is an attempt to produce the world we live in. The instruments it uses are norms: industrial standards, territorial models, ideological guidelines, truth criteria. These become the second nature of an expanding, accelerating drive to make this vast, unpredictable human region into a playground for capitalism.

Sophisticated services have now arisen to lead corporations through the tangle of agencies that their own lobbies helped to create, as a smokescreens to hide and further their interests. This map is a radical opposite to such a secretive, pay-per-view approach to the European institutions. The aim of this research is to help open the public eye – and our own eyes first of all – to the ways that private businesses and prestigious influence groups are able to shape the priorities of the Brussels bureaucracy, while making use of every bit of manufactured fear and every shred of manipulated belief as pretexts to advance their agendas. Of course, what you see here is not even half of it – just the paper-thin surface of the huge iceberg that we’re all about to run in to.

Who are we then? Take your pick. Among the pearls of EU normalese is the phrase “organised civil society.” The dream of the technocrats is to create a perfect fit between all those regulatory agencies, standards bureaus, relay networks, implementation teams, and you: the perfect European worker-consumer. Of course you’ll have a voice in everything concerning your profession, religion or ethnicity. Today there is approximately 1 representative in parliament for every 600,000 Europeans. So who’s producing here? Who’s dreaming? We prefer the other side of the map. Autonomous existences. Solidarity and the taste of freedom. (Brian Holmes, introduction à la publication « European norms of world-production », 2002)