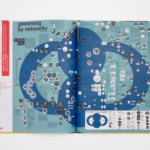 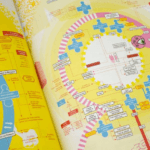 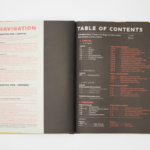 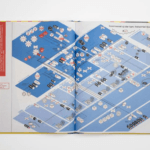 “This work, entitled Crisis  functions as a chronology of the world financial system in the 1990s. It attempts to situate the Argentinean revolt within the general framework of a worldwide economic cycle – essentially the period of so-called globalization, from 1989 onward. In the lower third of this long, lateral graphic chart, you see three horizontal axes corresponding to events within the three great currency zones of the Yen, the Euro and the Dollar, with a special bar devoted to the management of the IMF, above, and a line showing the frequencies of so-called “payment incidents,” or delays in the reimbursement of the Argentinean debt, below – a line which also serves to mark political events such as the election of Menem in 1989. The middle section of the chart widens the focus to look at strikes and riots against privatization processes across the entire world, in the year 2002. The top section unfolds beneath the phrase by Michael Linton, the inventor of the Local Exchange and Trading Systems (or LETS), who speaks of “money as an information system for recording human effort.” Their top section relates the development of alternative monetary systems over the decade of the 90s, culminating in the spectacular expansion of the Argentinean Red Global de Trueque system in the years of the crisis. In short, this chronology looks both at the failure of the financial markets, and at the popular responses to these failures – in an approach very close to the logic of the “double movement” described by Karl Polanyi. The first part of the chronology deals with the restructuring of the Japanese and American banking systems in the early nineties, after the first round of financial expansionism during the preceding decade. Then we see the tumult of great Asian crisis, with the radical inflation that hit the currencies of the East Asian region, after years of excessive speculation on the “tiger”economies. The crisis began with an attack on the Thai currency, the bhat, which rose from 30 to over 50 for one US dollar, as you can see in the suddenly rising jagged line of the chronology. Even worse was the case of the Indonesian rupee, marked at the height of its inflationary climb with the head of the authoritarian leader Suharto, who would fall along with the precarious living standard of the Indonesian people. But the graphic chart shows very clearly that the capitals fleeing the speculative krach of the East Asian economies found a perfect new home on the US stock market, where the values of companies like WorldCom and Enron shot up precipitously at the end of the millennium, before falling dramatically when the new economy bubble finally burst in mid-2000. There’s a perfect correlation, at this point, between the fall of the Northern stock markets and the rise in the “payment incidents”affecting the reimbursement of the Argentinean debt. The world economy is so tightly integrated that the long process of Argentina’s economic decay enters its crisis at the very moment when the American bubble bursts. The same line of rising “payment incidents” shows the key events in the social history of those tumultuous months: the corralito – or the closure of the Argentinean public banking system, before the currency’s radical devaluation – the withholding of a final loan by the IMF, the flight of De la Rua, the formation of the Piquetero Bloc of unemployed industrial workers, etc.” (Brian Holmes, 2005. Extract of “Remember the Present, Representations of Crisis in Contemporary Argentina”)